Having only received news of his death today it is still necessary to come to terms with the fact that he will no longer visit us and provide much needed guidance.  What a life he lived and how he inspired others.  This photo was taken more than 10 years ago in front of the Ouhoofgebou at Stellenbosch University.  Mary, Bob’s widow, is on the left with Dr Manfred Weiss, and his wife Monique, on the right of the photo.  Our thoughts are with the family and especially Mary. 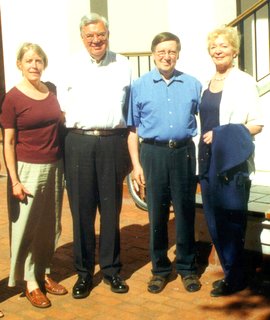 Here is the hyperlink to the moving obituary in the Guardian:  Sir Bob Hepple obituary

Sir Bob Hepple, freedom fighter and academic, who has died aged 81, fled from apartheid South Africa in 1963 to escape prison after working as Nelson Mandela’s lawyer and made his home in Britain.  In the UK he forged an outstanding career in academic life and as a leading advocate for equality.   Bob was born in Johannesburg to radical parents, Josephine (nee Zwarenstein) and Alex Hepple, and was educated at the Jeppe boys’ high school and the University of Witwatersrand, where he studied law.  His father, a trade unionist and leader of the South African Labour party, raised money to help pay for Mandela’s defence in what eventually turned into the 1956 Treason trial (he was acquitted).  Following the Sharpeville massacre of 1960, officials of the South African Congress of Trade Unions anticipated arrest at any time.  Bob was hastily given the administrative authority necessary to run the union’s affairs.

Not the least of the many remarkable features of Bob’s life was his modesty and reticence in referring to his own achievements.  It is likely that few people in academic and legal life in Britain knew the full story of his anti-apartheid activism and escape from South Africa until the publication of his memoir, Young Man With a Red Tie, in 2013.  His influence only grew as time went on, and his life and work inspired many to follow in his footsteps, as best they could.  He was knighted in 2004.

In 2014 Bob was awarded the gold medal of the Order of Luthuli by the South African president, Jacob Zuma, for “his bravery in the times when fighting for liberation was courting danger.  He chose to align himself with the marginalised to ensure that all who live in South Africa enjoy the privilege of equality.”