The 2014 amendments to the Labour Relations Act are considered as well as the potential unintended consequences of these amendments (such as the impact of ss 198 A (b) (ii) and s 198 B (5) on an employer’s ability to retrench). The book examines the meaning of the term operational requirements with extensive reference to case law and use of creative examples and hypotheticals.

Retrenchment Law in South Africa covers complex issues such as bumping and timing periods in the case of large-scale retrenchments. The author provides useful international comparisons in particular the ILO convention and the EUs Directive on Collective Redundancies. Practitioners and academics will benefit from this useful examination of retrenchment law. Who is the book aimed at? Labour law practitioners, post graduate students, union officials, commissioners arbitrators, HR Directors and judges.

Lectured at (the) Cape Technicon 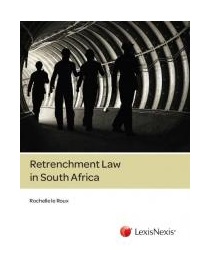