Rand Revolt: The 1922 insurrection and racial killings in South Africa

Racial murder and rebellion lie at the heart of this title. It focuses on South Africa’s ‘Rand revolt’ of 1922, when Johannesburg and its surrounding towns were wracked by industrial strife, racial violence and insurrection. White workers rose against their employers and the State, black people were hunted through the streets, and strikers launched an onslaught upon police and the army. Krikler recreates this world of intense conflict and analyses the sources and complex nature of its extreme passions. The title suggests novel ways of looking at racial identity and violence, and breaks new ground in other areas – for example, in its assessment of the impact of the First World War on labour movements, and its exploration of the significance of female violence during the upheaval.

Jeremy Krikler took his Honours degree at the University of Cape Town and his doctorate at Oxford. While researching rural areas in South Africa, he authored Revolution from Above, Rebellion from Below, a book on agrarian struggle and transformation in the country. Later works have focused on racial fears and violence, and the history of the white working class in South Africa. His works have been greatly influenced by his having lived through the transformation of Southern Africa. These studies culminated in the publication of White Rising (published in paperback as The Rand Revolt). He is married to Eliza Kentridge and lives in England where he is a Professor of History at the University of Essex. 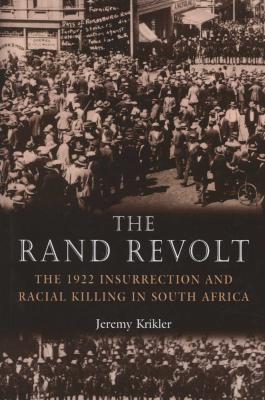